U.S. Trade and Investment in the Middle East and North Africa

- Overview and Issues for Congress 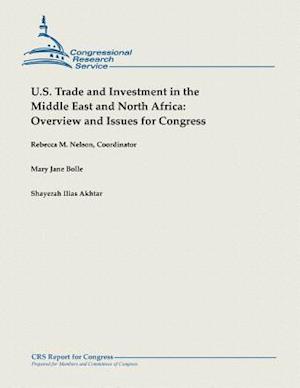 U.S. interest in deepening economic ties with certain countries in the Middle East and North Africa (MENA) has increased in light of the political unrest and transitions that have swept the region since early 2011. Policymakers in Congress and the Obama Administration are discussing ways that U.S. trade and investment can bolster long-term economic growth in the region. In May 2011, President Obama announced the MENA "Trade and Investment Partnership Initiative" (MENA-TIP), through which various federal government agencies are engaged in efforts to enhance trade and investment with the region. Such activities are in line with longstanding U.S. trade policy goals and measures. Some Members of Congress have called for deeper economic ties with MENA countries undergoing political change. However, continued political uncertainty and changing security environments in the region have prompted greater scrutiny of U.S. engagement. This report analyzes policy approaches that the Congress might consider concerning U.S.-MENA trade and investment. MENA Economies and Integration in the Global Economy - Economic performance in the MENA as a whole lags behind other regions in the world in terms of gross domestic product (GDP) per capita (living standards), employment, and economic diversification, despite the fact that several MENA countries are major producers of oil and natural gas. Limited integration in the global economy is frequently cited as an obstacle to the region's overall economic development. MENA's trade with the world is concentrated in a small number of products (oil exports and imports of manufactured goods) and among a small number of trading partners (particularly the European Union). Tariffs also remain high in some MENA countries and intra-regional trade and investment flows are relatively low. With regard to the United States, the MENA region accounts for less than 5% of U.S. total trade and 1% of U.S. foreign direct investment (FDI) outflows. U.S. businesses face a number of non-tariff barriers, such as lack of transparency, bureaucratic red tape, corruption, weak rule of law, and differences in business cultures. Policy Approaches and Challenges - Current U.S. trade and investment policies with MENA countries are quite varied. The United States has free trade agreements (FTAs) with five MENA countries (Bahrain, Israel, Jordan, Morocco, and Oman), but more limited ties with other countries, such as Libya, which is not a member of the World Trade Organization (WTO). Important exceptions to overall U.S. trade policy objectives in the region are Iran and Syria, which are both subject to trade sanctions. Analysts disagree about the merits of deepening U.S. trade and investment ties with the MENA region. Some analysts maintain that new trade and investment agreements help anchor domestic reforms, such as in governance and rule of law; support sound economic growth; are a costeffective way to support transitioning countries in an environment of budgetary constraints; and could promote U.S. exports and investment. Others argue that the empirical record between economic openness and democracy is weak and that it is unclear whether protesters in various Arab countries favor more economic liberalization, which they sometimes associate with corruption, inflation, and inequality. They also argue that political uncertainty in the region, such as the fluidity of Egypt's political transition, merits a "wait-and-see" approach before proceeding with substantial policy changes.