US Ariborne Units in the Pacific Theater 1942-45 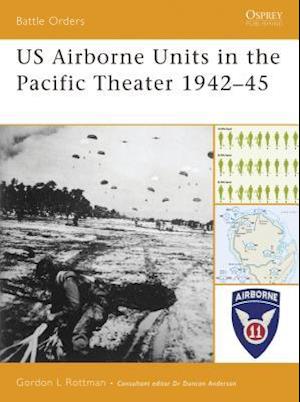 The US airborne units serving in the Pacific Theater during World War II are considered to be among the best-trained and effective forces in the war. Deployed in fewer numbers than was the case across Europe, parachute units such as the famed 11th Airborne Division and the 503rd Parachute Infantry Regiment operated in harsh terrain, over long distances against a determined enemy in the most extreme situations. These parachute regiments were involved in some of the most significant combat situations in the Pacific, recapturing Corregidor Island, invading the Aleutians and the first troops to arrive in Japan before its surrender. Using detailed maps, an array of photographs and color artwork and organizational tables, Gordon Rottman describes the internal organization, unique weaponry and equipment, training and combat operations of these elite units, highlighting unusual aspects of their service record and the difficulties of dropping onto tiny islands surrounded by freezing seas, completing the Battle Orders examination of the organization and operational deployment of all the US airborne units that fought in the war.