- Legitimacy and Legacy of Euro 2012 in Anthropological Perspective

indgår i serie Football Research in an Enlarged Europe 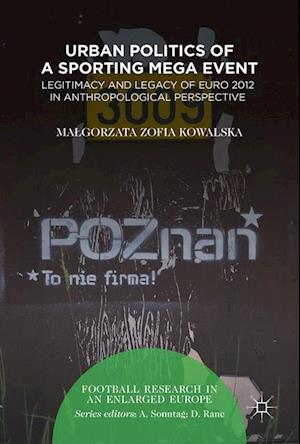 This book looks at the UEFA European Championship (Euro 2012) as both a crowning achievement of, and a way to sustain, the urban entrepreneurial strategy of Poznan, Poland. As the host city of the tournament almost 25 years after Poland's transformation from a centrally planned to a market economy in 1989, the author focuses on how the local myths and traditions of resourcefulness were invoked to embed an entrepreneurial urban strategy. The book also observes how the very same tradition of resourcefulness was used by the opposition to challenge the urban policies. Contrary to the authorities' expectations, Euro 2012 triggered a discussion about the extent to which large business- and leisure-oriented urban strategy corresponds to local regime of value. Urban Politics of a Football Mega Event will be of interest to students and scholars across a range of subjects, including anthropology, ethnography, sociology of sport, geography, history, political science and European studies.