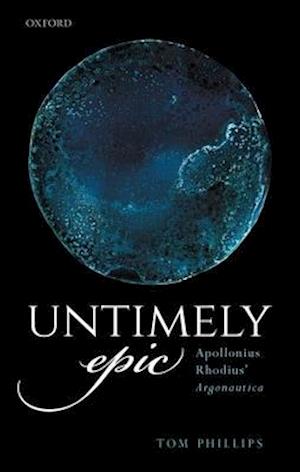 Apollonius Rhodius' Argonautica is a voyage across time as well as space. The Argonauts encounter monsters, nymphs, shepherds, and kings who represent earlier stages of the cosmos or human society; they are given glimpses into the future, and themselves effect changes in the world through which they travel. Readers undergo a still more complex form of temporal transport, enabled not just to imagine themselves into the deep past, but to examine the layers ofpoetic and intellectual history from which Apollonius crafts his poem.Taking its lead from ancient critical preoccupations with poetry's ethical significance, this volume argues that the Argonautica produces an understanding of time and temporal experience which ramifies variously in readers' lives. When describing the people and creatures who occupied the past, Apollonius extends readers' capacity for empathetic response to the worlds inhabited by others. In the ecphrasis of Jason's cloak and the account of Jason's conversations with Medea, readers areinvited to scrutinize the relationship between exempla and temporal change, while episodes such as the taking of the Golden Fleece explore links between perceptions and their temporal situation. Running through the poem, and through the readings that comprise this book, is an attention to the intellectualpotential of the 'untimely' - objects, experience, and language which do not belong straightforwardly to a particular time. Treatment of such phenomena is crucial to the poem's aspiration to inform and expand readers' understanding of themselves as subjects in and of history.

Forfattere
Bibliotekernes beskrivelse Untimely Epic offers a new interpretation of time in Apollonius Rhodius' Argonautica: rather than focusing predominantly on the structure of the narrative, it employs a range of theoretical concepts drawn from ancient and modern criticism to address how the poem shapes readers' experience of time and temporality.