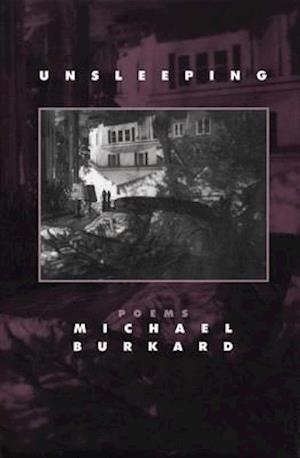 Reading Michael Burkard's daring new poems is like using a highly sophisticated listening device to eavesdrop on the unconscious. The signal is clear, but what we are hearing is teasingly indeterminent. Burkard has done us the wild favor of removing the usual mediation between waking and dreaming. A melancholy and intensely lyrical voice leads us to the edge of what words can say, and we follow with curiosity and amazement. And then, somehow, the voice goes beyond what can be said.Michael Burkard has over the years attracted a small but fanatical set of readers. I'm tempted to call him a cult figure, or a poet's poet . . . he is a school of one . . . a poet whose forte is his hauntedness and his sorrowful expressive mystery. Burkard is a poet who should be read rather than explained, and in an era which our poets' voices have grown benumbingly interchangeable and predictable, this quality makes Burkard all the more distinct.-David Wojahn in PoetryUnsleeping is Michael Burkard's eighth collection of poetry. His previous book, Entire Dilemma was published by Sarabande books in 1998, and W.W. Norton published My Secret Boat: A Notebook of Prose and Poems in 1990. He has received a Whiting Writers' Award, the Poetry Society of America's Alice Fay di Castagnola Award, and two grants from both the New York State Foundation for the Arts and the National Endowment for the Arts. He has taught at various colleges and universities, most recently Syracuse University, University of Louisville, and LeMoyne College. He lives in Syracuse, New York.