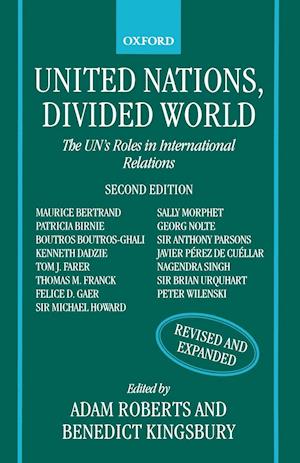 This book, highly praised as an authoritative assessment of the United Nations and its place in international relations, brings together distinguished academics and senior UN officials in a clear and penetrating examination of how the UN has developed since 1945. It examines the UN's various roles in addressing long-standing and difficult problems in the relations of states in such fields as international security, human rights, international law, and economicdevelopment.The book takes into account a wide range of developments in a world which remains very much divided; the rapid expansion of UN peacekeeping and election-monitoring activities; the consequences of the collapse of communism in eastern Europe and the Soviet Union; the 1990-1 Gulf conflict and its aftermath; attempts at settlement of many regional conflicts; UN involvements in fractured societies, including Cambodia, Somalia, and the former Yugoslavia; and the political and resource limits of theUN's capabilities. This edition also takes full account of new sources, writings, and debates.There are four completely new chapters, by Patricia Birnie (environmental protection), Sally Morphet (peacekeeping), Brian Urquhart (post-Cold War security), and Peter Wilenski (the UN's structure). An appendix contains the full text of former Secretary-General Boutros-Ghali's important report, An Agenda for Peace, to which he has added an introduction for this book.United Nations, Divided World is also a key reference work. The appendices include a bibliography and the complete text of the UN Charter, with all amendments. They also include lists of member states and their assessed contributions, Secretaries-General, UN peacekeeping and observer forces, and judgments and opinions of the International Court of Justice.