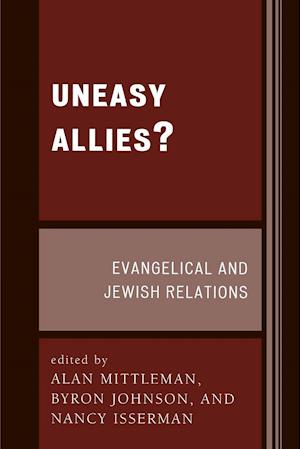 Uneasy Allies? offers a careful study of the cultural distance between Jews and Evangelicals, two groups that have been largely estranged from one another. While in the past, American Jews have been wary of accepting the support of would-be Evangelical Christian allies, changes have occurred due to the critical situation in the Middle East. Over the past few years, leaders in mainstream Jewish organizations have been more open to accepting Evangelical support but have also encountered new tensions. Alan Mittleman, Byron R. Johnson, and Nancy Isserman bring together a collection of critical essays that investigate how each group perceives the other and the evolution of their relationship together. This book focuses on the history of Evangelical-Jewish relations from the level of communal agencies to grassroots groups. While the essays document differences in worldview, ethos, and politics, they also highlight shared values and problems. These commonalities have the potential to broaden the relationship between the two communities. Uneasy Allies? is an illuminating book that will stimulate discussion among scholars of religion and politics and those interested in Jewish studies.