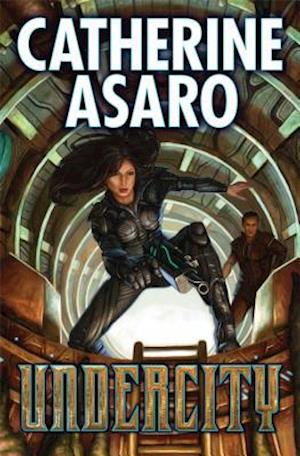 BOOK ONE IN A BRAND NEW SERIES by Nebula and Hugo Award Winner Catherine Asaro set in the world of her Skolian Empire universe. In the galaxy-spanning future, Major Bhaajan is a tough female P.I. who works the dangerous streets of Undercity. Major Bhaajan, a former military officer with Imperial Space Command, is now a hard-bitten P.I. with a load of baggage to deal with, and clients with woes sometimes personal, sometimes galaxy-shattering, and sometimes both. Bhaajan must sift through the shadows of dark and dangerous Undercity--the enormous capital of a vast star empire--to find answers. About Undercity

"Asaro plants herself firmly into that grand SF tradition of future history franchises favored by luminaries like Heinlein, Asimov, Herbert, Anderson, Dickson, Niven, Cherryh, and Baxter. . .They don't write em like that anymore Except Asaro does, with . . . up-to-the-minute savvy "--Locus " Bhaajan], who starts out keeping an emotional distance from the people in the Undercity soon grows to think of them as her community once more. Asaro . . . returns to the Skolian empire's early history to tell Bhajaan's story."--Booklist

"Asaro delivers a tale rich with the embedded history of her world and bright with technical marvels. Her characters are engaging and intriguing and there is even a bit of romance. What really touched my heart was Bhaaj's interaction with the children of the aqueducts. I spent the last fifty pages of the book sniffling into a tissue."--SF Crowsnet

"I'm hooked, both on her writing and her Skolian universe. This book had everything I wanted: strong characters, a new and unique world, and a plot that isn't as simple as it first appears."--TerryTalk About Catherine Asaro's Skolian saga:

"Entertaining mix of hard SF and romance."--Publishers Weekly "Asaro's Skolian saga is now nearly as long and in many ways as compelling as Dune, if not more so, featuring a multitude of stronger female characters."--Booklist "Rapid pacing and gripping suspense."--Publisher's Weekly