- The Crisis of Voter Suppression in America 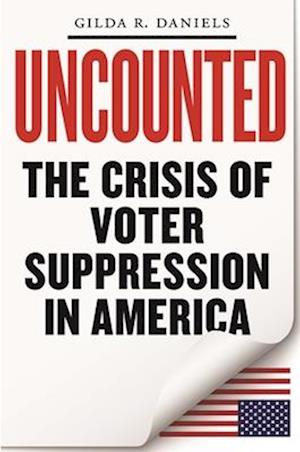 An answer to the assault on voting rights-crucial reading in advance of the 2020 presidential electionThe Voting Rights Act of 1965 is considered one of the most effective pieces of legislation the United States has ever passed. It enfranchised hundreds of thousands of voters, particularly in the American South, and drew attention to the problem of voter suppression. Yet in recent years there has been a continuous assault on access to the ballot box in the form of stricter voter ID requirements, meritless claims of rigged elections, and baseless accusations of voter fraud. In the past these efforts were aimed at eliminating African American voters from the rolls, and today, new laws seek to eliminate voters of color, the poor, and the elderly, groups that historically vote for the Democratic Party.Uncounted examines the phenomenon of disenfranchisement through the lens of history, race, law, and the democratic process. Gilda R. Daniels, who served as Deputy Chief in the United States Department of Justice Civil Rights Division and more than two decades of voting rights experience, argues that voter suppression works in cycles, constantly adapting and finding new ways to hinder access for an exponentially growing minority population. She warns that a premeditated strategy of restrictive laws and deceptive practices has taken root and is eroding the very basis of American democracy-the right to vote!

Forfattere
Bibliotekernes beskrivelse Subtitle on jacket: The crisis of voter supression in America.