Uncle Shawn and Bill and the Almost Entirely Unplanned Adventure 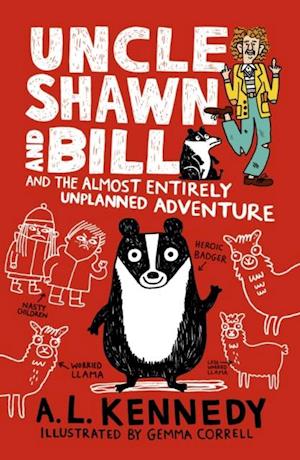 The first book in a hilarious, heartwarming new series for children from Costa Book of the Year Award-winning author A. L. KennedyThe first book in a hilarious new series from Costa Book of the Year-winning author A. L. Kennedy, featuring a polite badger, the world's most depressed llamas, and an eccentric but extremely kind uncle named Shawn.Badger Bill is having a very bad evening - possibly the worst of his whole life. He's been just been kidnapped by the McGloone sisters, two huge, mean women with eyes the colour of bad-flavoured boiled sweets. In just two days time, they're going to dress him in unflattering shorts and make him fight Ripper, Snapper and Cracker, three vicious, unimaginatively named dogs. The only things in the world that are more depressed than Bill are four llamas who are about to be made into pies by the unpleasant McGloone sisters' even less pleasant brother, Farmer McGloone. But it's all right, because Uncle Shawn is here, and he has a plan - or part of one. He's going to rescue Badger Bill and the four llamas with the help of a friendly mole and a few squirrels. As long as his plan works. It involves quite a lot of dancing for a rescue mission - can Uncle Shawn really pull off his plan and save the day?