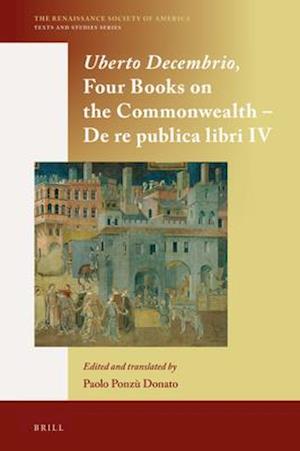 Uberto Decembrio's Four Books on the Commonwealth (De re publica libri IV, ca. 1420), edited and translated by Paolo Ponz Donato, is one of the earliest examples of the reception of Plato's Republic in the 15th century. This humanistic dialogue provides a thoughtful insight on themes such as justice, the best government, the morals of the prince and citizen, education, and religion. Decembrio's dialogue is dedicated to Filippo Maria Visconti, duke of Milan, the 'worst enemy' of Florence. Making use of literary and documentary sources, Ponz Donato convincingly proves that Decembrio's thought, sharing many points with the Florentine humanist Leonardo Bruni, belongs to the same world of Civic Humanism.