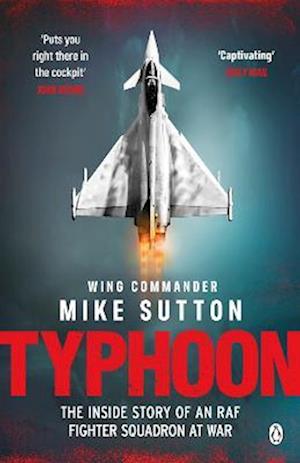 The thrilling and extraordinary account of the Typhoon FGR4s in the war against ISIS, from the RAF Wing Commander who led them into combat'An adrenaline-fuelled, gripping account that puts you right in the cockpit of one of the RAF's most modern combat aircraft . . . Typhoon is a rare insight into the high-pressure, high-stakes world of an RAF fighter squadron at war' JOHN NICHOL_________The Eurofighter Typhoon FGR4 is the most advanced multi-role combat aircraft in the world.Capable of flying at nearly twice the speed of sound and powering to a height of over ten miles in less time than it takes to boil a kettle, a single Typhoon can also deliver a heavy bombload with such lethal precision that a whole squadron of Lancasters could not have guaranteed the same result.Taking command of the RAF's premier Typhoon squadron represented the pinnacle of Mike Sutton's career as fighter pilot. Until the day he was told he would be leading 1 (Fighter) Squadron into battle against a bloody and brutal enemy hellbent on establishing a permanent stronghold across Syria and Iraq and spreading terror across the free world.Their mission was to help stop them in their tracks.In proving the Typhoon in combat, they would be flying in some of the world's most treacherous skies, where ground fire, anti-aircraft artillery and the latest surface-to-air missiles posed a constant danger. The threat of getting shot down behind enemy lines was a fact of life. Typhoon is the first inside account of the RAF's long war against ISIS; a campaign in which any mistake could have devastating consequences . . .