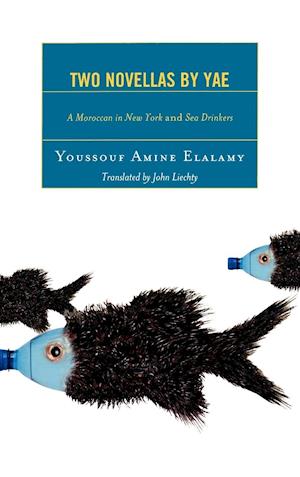 Two Novellas by YAE comprises two works by Youssouf Amine Elalamy, also known as YAE, translated from French into English for the first time. A Moroccan in New York tells the tale of a young man seeking to make sense of two cultures which seemingly could not be more opposite, yet, are on many levels, so much the same. Autobiographical, YAE's story is the compilation of the musings of a young man on a Fulbright grant in New York in the early 1990s. In particular, the work reveals multiple misconceptions and misunderstandings Americans have about Moroccans and, other foreigners. Sea Drinkers is a compelling story that reveals the hurdles faced by Moroccan emigrants who illegally try to cross the slim stretch of water in small boats between Morocco and Spain. The hundreds who attempt the dangerous crossing every year are known as the harraga, which in Arabic means "the burners." The Moroccans who embark must literally "burn" the bridges of their lives (their identity papers and passports), in order to clandestinely infiltrate into the countries across the water. These characters tell the tales of those who become stateless and who, more often than not, die untimely deaths in the waters between two continents (a distance of less than fifteen miles).