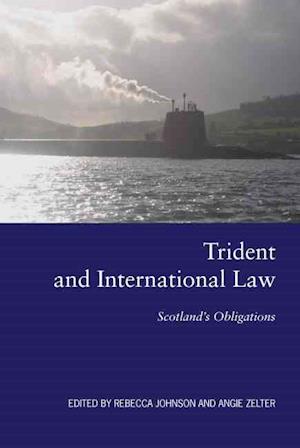 Challenging the legality of UK nuclear policy as a further generation of nuclear-armed submarines is developed, Trident and International Law asks who is really accountable for Coulport and Faslane. Although controlled by the Westminster Government, and to some extent by the US Government, all of the UK's nuclear weapons are based in Scotland. The Scottish Government therefore has responsibilities under domestic and international law relating to the deployment of nuclear weapons in Scotland. Public concern expressed over these responsibilities led to the Acronym Institute for Disarmament Diplomacy, the Edinburgh Peace and Justice Centre and Trident Ploughshares organising an international conference, 'Trident and International Law: Scotland's Obligations', in Edinburgh in 2009. This book presents the major documents and papers, with additional arguments from renowned legal scholars. The conclusions deserve careful consideration.

Forfattere
Bibliotekernes beskrivelse The controversial Westminster owned Trident is based at Coulport and Faslane yet how much is known about the dangers this presents to the local Scottish community or the complications it highlights in International Law.