- One Man's Epic, Never-Done-Before (and Sort of Illegal) Hike Across the Heartland 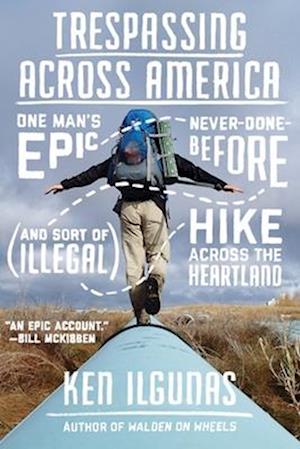 Winner of the Nebraska Center for the Book Award, Travel - A Sigurd Olson Nature Writing Award Notable Book - Honoree of the Society of Midland Authors Annual Literary Award for Biography/Memoir Now that President Donald Trump has revived the Keystone XL pipeline that was rejected by former President Obama, Trespassing Across America is the book to help us understand the kaleidoscopic significance of the project. Told with sincerity, humor, and wit, Ilgunas's story is both a fascinating account of one man's remarkable journey along the pipeline's potential path and a meditation on climate change, the beauty of the natural world, and the extremes to which we can push ourselves--both physically and mentally.

It started as a far-fetched idea--to hike the entire length of the proposed route of the Keystone XL pipeline. But in the months that followed, it grew into something more for Ken Ilgunas. It became an irresistible adventure--an opportunity not only to draw attention to global warming but also to explore his personal limits. So in September 2012, he strapped on his backpack, stuck out his thumb on the interstate just north of Denver, and hitchhiked 1,500 miles to the Alberta tar sands. Once there, he turned around and began his 1,700-mile trek to the XL's endpoint on the Gulf Coast of Texas, a journey he would complete entirely on foot, walking almost exclusively across private property. Both a travel memoir and a reflection on climate change, Trespassing Across America is filled with colorful characters, harrowing physical trials, and strange encounters with the weather, terrain, and animals of America's plains. A tribute to the Great Plains and the people who live there, Ilgunas's memoir grapples with difficult questions about our place in the world: What is our personal responsibility as stewards of the land? As members of a rapidly warming planet? As mere individuals up against something as powerful as the fossil fuel industry? Ultimately, Trespassing Across America is a call to embrace the belief that a life lived not half wild is a life only half lived. It's the perfect travelers gift for fans of Free Solo and Turn Right at Machu Picchu.