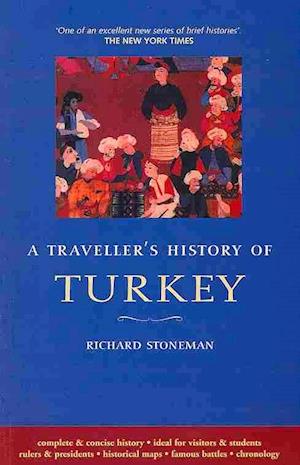 A Traveller's History of Turkey offers a full and accurate portrait of the region from Prehistory right up to the present day. Particular emphasis is given to those aspects of history which have left their mark in the sites and monuments that are still visible today. Modern Turkey is the creation of the present century, but at least seven ancient civilizations had their homes in the region. Turkey also formed a significant part of several empires, those of Persia, Rome, and Byzantium, before becoming the centre of the opulent Ottoman Empire. All of these great cultures have left their marks on the landscape, architecture, and art of Turkey - a place of bewildering facets where East meets West with a flourish. Richard Stoneman's concise and readable account covers everything including the legendary Flood of Noah, the early civilization of Catal Huyuk seven thousand years before Christ, the treasuries of Troy, Alexander the Great, the Romans, Seljuks, Byzantines, and the Golden Age of the Sultans to the twentieth century's great changes wrought by Kemal Ataturk.Its up-to-the-minute coverage includes developments in the twenty-first century including the progress of Turkey's application to join the European Community and the simmering issues of Kurdish nationalism and Islamic fundamentalism, which make this fast-growing country a focus of the world's attention.

Forfattere
Bibliotekernes beskrivelse Modern Turkey is the creation of the present century, but at least seven ancient civilisations had their homes in the region. This book offers a full portrait of the region from Prehistory right up to this day. It emphasises on those aspects of history which have left their mark on the sites and monuments that are still visible. line drawings