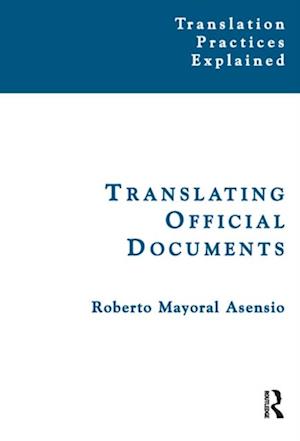 Official translations are generally documents that serve as legally valid instruments. They include anything from certificates of birth, death or marriage through to academic transcripts or legal contracts. This field of translation is now as important as it is fraught with difficulties, for it is only in a few areas that the cultural differences are so acute and the consequences of failure so palpable. In a globalizing world, our official institutions increasingly depend on translations of official documents, but little has been done to elaborate the skills and dilemmas involved. Roberto Mayoral deals with the very practical problems of official translating. He points out the failings of traditional theories in this field and the need for revised concepts such as the virtual document, pragmatic constraints, and risk analysis. He details aspects of the social contexts, ethical norms, translation strategies, different formats, fees, legal formulas, and ways of solving the most frequent problems. Care is taken to address as wide a range of cultural contexts as possible and to stress the active role of the translator. This book is intended as a teaching text for the classroom, for self-learning, or for professionals who want to reflect on their practice. Activities and exercises are suggested for each chapter, and information is included on professional associations and societies across the globe.