- The Art of Silver Horn and His Successors 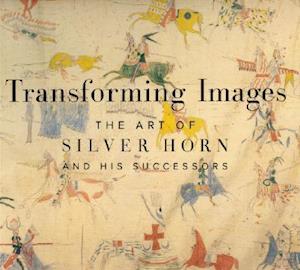 Silver Horn's lifespan (1860-1940) placed him in the midst of extreme cultural transformations: by the time of his death, highways, silos, and gas stations dominated the land that had, at his birth, been the domain of buffalo herds and Plains Indians. Silver Horn's art documents these changes in the lives of the Kiowa Indians, as well as changes in Kiowa art itself. From the traditional hide paintings, themes of warfare, and two-dimensional perspectives, Silver Horn progressed through ledger drawings, scenes of domesticity, and experiments with more naturalistic styles. The bridge he created between ancient Kiowa aesthetics and modern forms of expression had dramatic impact, serving as models for younger Native American artists such as the Kiowa Five of the 1930s, and influencing contemporary artists such as Sharron Ahtone Jarjo, T.C. Cannon, and Sherman Chaddlesone. Works by each of these artists appeared at the Alfred Smart Museum of Art for Transforming Images, a comprehensive exhibition of Silver Horn's work. This volume, illustrated with 75 colour plates and 15 black and white photographs, collects art and commentary from the exhibit.