- Embracing Our True Identity and Purpose

indgår i serie Core for Men 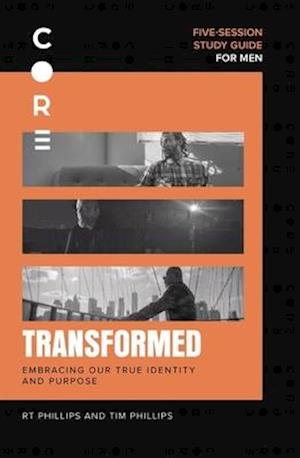 Transformation begins with deconstruction. In CORE for Men: Transformed, we challenge what we thought defined manhood, and we replace the messages of our tribes with what God says in his Word is true about who we are. But we can't stop there-transformation doesn't happen until we get real with our brotherhood. Learn to trust one another with issues you've been struggling with. Isolation is suffocating, but when we get honest about the idols we are pursuing, we can change the trajectory of our life. And when we push for the elite level in life, it's essential to stop and reload every once in a while, to get grounded into what matters and prepared for what's next. In this second CORE for Men study we learn about: Manhood: Our "tribes" of culture, race, family, neighborhood, and career don't define our identity. Unearned forgiveness levels the playing field, and redefines manhood in countercultural ways (such as winning is losing, leading is serving, strength is humility). Our Past: Our past has shaped us and how we see God, ourselves, and others in ways that may not be true. God has given us his Word so we can know how to think, see and live. Brotherhood: When we stop hiding ourselves from others, they won't think less of us-they'll actually value us more! Idols: Whatever is more important to us than God will ultimately become self-destructive. Ridgelines: We make our greatest mistakes when we don't have a high, hard ridgeline we're aiming for, and when we don't stay accountable. Sessions include: Identity (Propaganda, poet and activist)Transformation (Willie Alfonso, chaplain, New York Yankees)Brotherhood (Sam & Emmanuel Acho, NFL players)Choices (Jerry Quiroz, professional soccer player)Reload (Clint Bruce, US Navy SEAL)Brought to you by the men behind Promise Keepers, the passion behind the CORE for Men studies is to create spaces where men have permission to be real. Spaces where men discover they are not alone with the kind of doubts and fears they face. Spaces where they have like-minded brothers who are there with them. The two CORE for Men studies-Redeemed and Transformed-feature five real-life stories of men who have faced their two biggest battles: Isolation and Disqualification. Isolation: "If you knew how messed up some of my life is, you wouldn't want to have anything to do with me." Disqualification: "If you knew how messed up some of my life is, you wouldn't want me to have anything to do with you." There has never been a more critical need to equip men with the tools to win the battles over their hearts and futures. CORE for Men invites men to step out of shame and isolation and encourages them to step into their God-given purpose. Designed for use with CORE for Men: Transformed Video Study (9780310131779), sold separately. Streaming video access included.

Forfattere
Bibliotekernes beskrivelse Each CORE five-session video study features real-life stories of men who have faced real-life challenges and discovered transformation, redemption, restoration, purpose, and identity. These stories serve as a catalyst for men to start being real about their own stories and realize they are not alone in the struggle. 1 Paperback / softback