- Magic, Ritual, and Gender from Late Antiquity to 1000 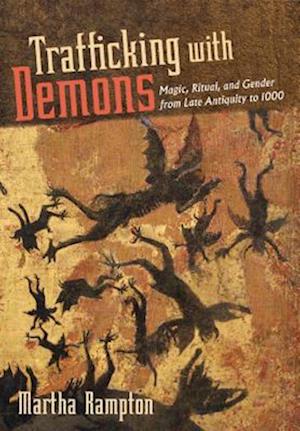 Trafficking with Demons explores how magic was perceived, practiced, and prohibited in western Europe during the first millennium CE. Through the overlapping frameworks of religion, ritual, and gender, Martha Rampton connects early Christian reckonings with pagan magic to later doctrines and dogmas. Challenging established views on the role of women in ritual magic during this period, Rampton provides a new narrative of the ways in which magic was embedded within the foundational assumptions of western European society, informing how people understood the cosmos, divinity, and their own Christian faith.As Rampton shows, throughout the first Christian millennium, magic was thought to play a natural role within the functioning of the universe and existed within a rational cosmos hierarchically arranged according to a 'great chain of being.' Trafficking with the 'demons of the lower air' was the essense of magic. Interactions with those demons occurred both in highly formalistic, ritual settings and on a routine and casual basis. Rampton tracks the competition between pagan magic and Christian belief from the first century CE, when it was fiercest, through the early Middle Ages, as atavistic forms of magic mutated and found sanctuary in the daily habits of the converted peoples and new paganisms entered Europe with their own forms of magic. By the year 1000, she concludes, many forms of magic had been tamed and were, by the reckoning of the elite, essentially ineffective, as were the women who practiced it and the rituals that attended it.