Towards a New Architecture 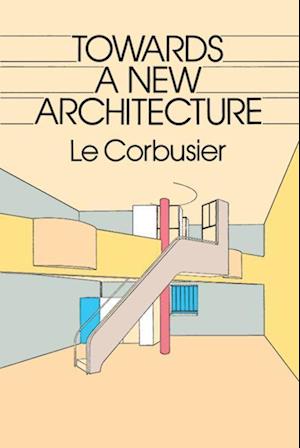 For the Swiss-born architect and city planner Le Corbusier (Charles- douard Jeanneret, 1887-1965), architecture constituted a noble art, an exalted calling in which the architect combined plastic invention, intellectual speculation, and higher mathematics to go beyond mere utilitarian needs, beyond "style," to achieve a pure creation of the spirit which established "emotional relationships by means of raw materials."

The first major exposition of his ideas appeared in Vers une Architecture (1923), a compilation of articles originally written by Le Corbusier for his own avant-garde magazine, L'Esprit Nouveau. The present volume is an unabridged English translation of the 13th French edition of that historic manifesto, in which Le Corbusier expounded his technical and aesthetic theories, views on industry, economics, relation of form to function, the "mass-production spirit," and much else. A principal prophet of the "modern" movement in architecture, and a near-legendary figure of the "International School," he designed some of the twentieth century's most memorable buildings: Chapel at Ronchamp; Swiss dormitory at the Cit Universitaire, Paris; Unit d'Habitation, Marseilles; and many more.

Le Corbusier brought great passion and intelligence to these essays, which present his ideas in a concise, pithy style, studded with epigrammatic, often provocative, observations: "American engineers overwhelm with their calculations our expiring architecture." "Architecture is stifled by custom. It is the only profession in which progress is not considered necessary." "A cathedral is not very beautiful . . ." and "Rome is the damnation of the half-educated. To send architectural students to Rome is to cripple them for life."

Profusely illustrated with over 200 line drawings and photographs of his own works and other structures he considered important, Towards a New Architecture is indispensable reading for architects, city planners, and cultural historians―but will intrigue anyone fascinated by the wide-ranging ideas, unvarnished opinions, and innovative theories of one of this century's master builders.