Tonus Peregrinus: The History of a Psalm-tone and its use in Polyphonic Music 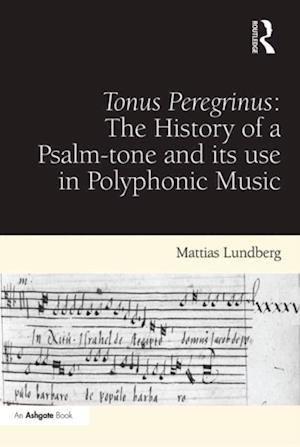 Mattias Lundberg investigates the historical role of a deviant psalm-tone, the tonus peregrinus, focusing on its applications in polyphonic music within all major branches of Western liturgy. Throughout the remarkably persistent tradition of applying this melody to polyphony, from the ninth century right up to the twenty-first, coeval music theory is able to shed light on the problems it has posed to modal and tonal practice at various historical stages. The musical settings studied hold up a mirror to the general development of psalmody, concerning practices of organum, diverse regional forms of fauxbourdon, cantus firmus composition, free imitation, parody, fugue, quodlibet, monody, and many other compositional techniques where the unique features of the psalm-tone have necessitated modification of existing practices. The conclusions drawn reveal a musico-liturgical tradition that was not in real danger of extinction until the general decline of Western liturgy that followed in the eighteenth century, at which point the historiography of the tonus peregrinus became a factor stimulating scholarly and musical interest in its alleged pre-Christian origins. Lundberg demonstrates that the succession of works based on the tonus peregrinus often preserved a distinctly conservative musical and theological conception even during periods of drastic liturgical reform.