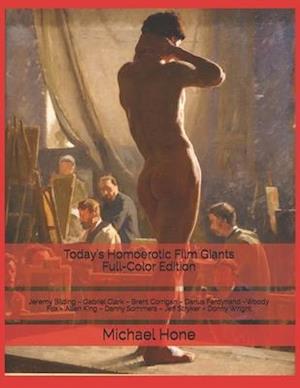 Statistically only 10% of the male population has accepted what our forefathers the Greeks knew to be the esthetic center of their art and the warming presence in their beds, the beauty and erotic joy of the male body. The men within these pages are the meritorious descendants of those hallowed times, the torchbearers who are, today, awakening boys in increasingly vast numbers to the reality that they can fully express themselves sexually and intellectually through their union with other males, for men have advanced human society, in sculpture, painting, philosophy and military science thanks to Alexander the Great, a warrior genius conquered but one time, by the thighs of his lover Hephaestion.

From Willem Arondeus who cried out when facing a Nazi firing squad, ''Let it be known that homosexuals are not cowards'', to Tim Cook's declaration, ''I consider being gay among the greatest gifts God has given me'', to N.F.L.'s lineman Carl Nassib's very recent announcement [21 June 2021], ''I just want to take a quick moment to say that I'm gay'', this generation has shown itself to be the continuation of a past enriched by Alcibiades, Socrates, Emperor Hadrian, da Vinci, Michelangelo, Cellini, Caravaggio, Maynard Keynes, Proust, Tchaikovsky, Walt Whitman and hundreds of others, all men who preferred men, which in no way makes gays superior thanks to their sexuality, but we are irrefutably in no way inferior either, something we must defend at the cost of our lives and livelihoods.

The men I've chosen for this full-color edition--a good hundred in their totality--have not only been the guiding lights for pubescent boys to accept themselves for who they are, but have shown exactly how to physically honor the perishable warmth awaiting the luckiest of us in an open bed at day's end, a union that has taken 2000 years to concretize in a husband nestled in the arms of his husband.