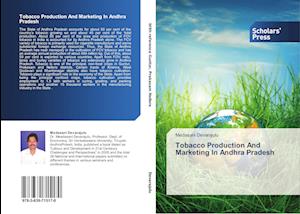 The State of Andhra Pradesh accounts for about 50 per cent of the country's tobacco growing ea and about 45 per cent of the 'total production. About 95 per cent of the area and production of FOV tobacco in India is accounted for by Andhra Pradesh alone. The FCV variety of tobacco is primarily used for cigarette manufacture and earns substantial foreign exchange resources. Thus, the State of Andhra Pradesh has near monopoly in the cultivation of FCV tobacco and has an average annual production of about 594 million kg. Out of this, about 50 per cent is exported to various countries. Apart from FOV, natu, lanka and burley varieties of tobacco are extensively grow in Andhra Pradesh. Tobacco is one of the principal. non-food crops in Guntur, Prakasam and Nellore districts. Certain tracts of Krishna, West Godavari and Kharimnagar districts also have tobacco cultivation. Tobacco plays a significant role in the economy of the State. Apart from being the principal nonfood crops, tobacco cultivation provides employment to 1.5 lakh workers in curing, grading, and packing operations and another 15 thousand workers in the manufacturing industry in the State .