To Those Who Knew 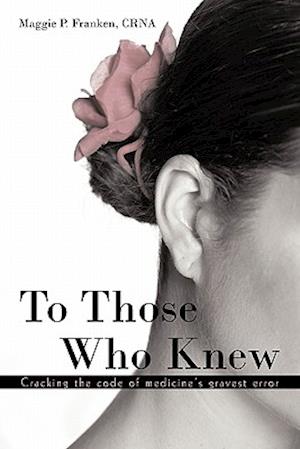 What do the doctors at her work know about this nurse anesthetist that she doesn't even know herself? Some of them know that she's on a broken path of a disease that nobody talked about -it's implications are just that dreadful. But she's on a journey that no one could foresee. And her way of looking at the disease would shed a whole new light on the situation.

It's a true story of one person having all the cards stacked against her but beating all the odds instead. All but a few physicians have written her off, but she fights for her life in the most desperate of ways. It would take her a while to understand why they won't fix it and when she does, nothing would prepare her for what she learns about her own medical crises and that of her family's.

In her autobiographical account, you'll also learn some important information that should be on your radar next time you see your doctor. Even though it can now be fixed, you'll learn why the medical profession doesn't necessarily want you to know about it. Everyone becomes a patient at some point in their life. Be informed and maybe even be a couple steps ahead of your doctor.