To Know John Lennon: An Intimate Portrait from His Friends, Colleagues, and Family 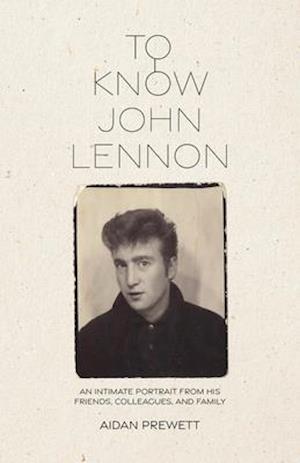 "Prewett has reinvented the rock biography through his immersive, entertaining interviews with key players...this is a triumph." -Plastic EP

Critically-acclaimed documentary filmmaker and author Aidan Prewett draws a portrait of the genuine Lennon - the generous, charming, and wickedly funny human being behind the icon - through incisive new interviews with John's closest friends, colleagues, and family.

Personal moments are recorded in telling detail: Rehearsing with the Quarrymen in Lennon's mother's bathroom. Taking a stroll around the block at 3am in New York City. Singing old rock 'n' roll hits in the back of a limousine. And spending the night in a London train yard in 1965.

Travel with John through his school days and career with the Beatles - to his solo career and life in New York, up to his last recording session.

This is as close as it gets to spending a few hours in the company of John Lennon.