To Eliminate the Opiate

indgår i serie To Eliminate the Opiate 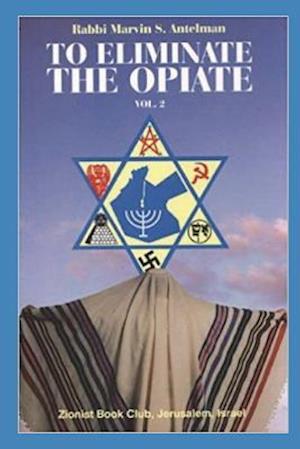 'To Eliminate the Opiate' Volume Two is the continuation of the first well-presented history of the conspiratorial efforts to subvert and undermine Judaism. Read about: Rosa "the Red" Cohen (Yitzchak Rabin's mother), a Soviet official under Lenin and charismatic leader of Israel's Communists who advocated Narodni Volya policy of political assassination and how Rabin murdered fellow Jews in cold blood because they were anti-communists. The Rabbinic Court accounts of wife swapping in Poland through the followers of the heretical Sabbatian Frankists Red Kabbala, excommunicated by the Supreme Rabbinic Court of Europe on Sivan 20, 1756 stating their "women are whores and their children are bastards to the tenth generation." The Sabbatian ritual which conceived Adolph Hitler on the 9th of Av, fast Day for the destruction of the First and Second Temples on July 20, 1888, Hitler was born 9 months later April 20, 1889. Accordingly, his real father was not Alois Shickelgruber and his Sabbatian roots are also maternal stemming from the Strones family. Two people named Mayer; Professor Joseph Mayer, Catholic theologian, inventor of the gas chambers and crematoria - and Saly Mayer, born a Jew, whose hatred for Jews led him together with the Shomer Hatzair Communist colleague Nathan Schwalb to abort a rescue mission to save 120,000 Jews from extermination by the Nazis. The dirty secrets of the Conservative movement. Zechariah Frankel a Sabbatian Frankist who founded it in 1845. Adolf Jellinek revolutionary Communist Sabbatian Frankist who was Solomon Shechter's Rabbi, his colleagues, of the Bet Midrash of Vienna and their conspiracies with the Anti Semitic party of Austria, Hitler's mentors. Stalin's anti-Semitism, his pact with Hitler in 1939 and how it drove Jewish born Communist up the wall. His hit team in New York which used the Communist Yiddish paper Freiheit as a front, and how they planned the assassination of Trotsky. The connection between Edwin Canham, World Peace Foundation, Elma Lewis, Farrakhan, CFR, Alger Hiss, the Japanese Red Army and the PLO. How the CFR backed Hitler and promotes Hezbollah and other terrorists. The Gorbachev Foundation with the help of the pagan new agers plans to rid the world of one-fourth of its population in the 21st century starting with religious fundamentalists.