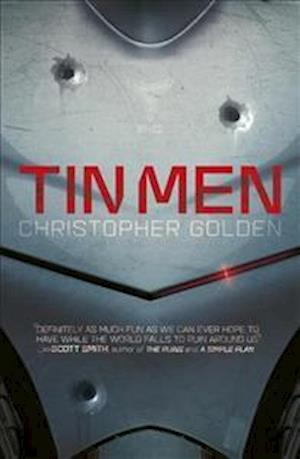 Tin Men by Christopher Golden - author of Snowblind - is a must-read for fans of Dean Koontz, Peter Straub and Joe Hill thanks to its high concept and jaw-dropping thrills.Economies are collapsing, environmental disasters are widespread and war the backdrop to life.And so the military has developed a force of elite soldiers to keep the peace. A force like nothing seen before ... codenamed Tin Man, soldiers are virtually transported to inhabit robot frames in war-torn countries.When PFC Danny Kelso starts his day shift in Syria, an eerie silence welcomes him and a patrol confirms the area is totally deserted. But when a rogue electromagnetic pulse throws everything into darkness, Danny's conscious mind is trapped within his robot body. The attack turns out to have been global - the world is facing a return to the dark ages with no electricity, no technology ... no safe zones. And the Tin Men face a race against time to save not only themselves but society as we know it.

Forfattere
Bibliotekernes beskrivelse Avatar meets Roboapocalypse in this high-octane, near-future thriller, which spins the troubles of today into the cataclysm of tomorrow.