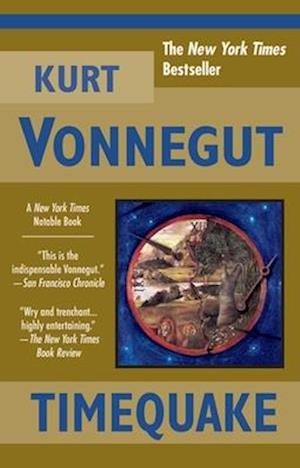 A New York Times Notable Book from the acclaimed author of Slaughterhouse-Five, Breakfast of Champions, and Cat's Cradle. At 2:27pm on February 13th of the year 2001, the Universe suffered a crisis in self-confidence. Should it go on expanding indefinitely? What was the point? There's been a timequake. And everyone--even you--must live the decade between February 17, 1991 and February 17, 2001 over again. The trick is that we all have to do exactly the same things as we did the first time--minute by minute, hour by hour, year by year, betting on the wrong horse again, marrying the wrong person again. Why? You'll have to ask the old science fiction writer, Kilgore Trout. This was all his idea.

Forfattere
Bibliotekernes beskrivelse Kurt Vonnegut's first full-length work in seven years--now in trade paperback! There's been a timequake. And everyone must relive the decade between February 17, 1991 and February 17, 2001. The trick is, everything has to be done "exactly" as it was the first time. Why? You'll have to ask the old science fiction writer, Kilgore Trout. This was all his idea.