- Syntactic Interfaces with Semantics and Discourse 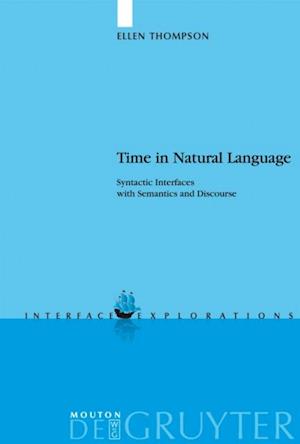 Time in Natural Language investigates the relationship between the syntactic and semantic representations of sentences within the domain of tense. Assuming that tenses are semantically composed of three distinct times, Thompson proposes that these times map onto the syntax in a regular fashion: each time is associated with a unique syntactic head. Adopting the Minimalist approach to syntactic theory, this approach makes possible insightful analyses of syntactic structures involving temporal dependency. Thompson argues that, depending on their adjunction site, temporal adverbials modify different parts of the tense structure of the clause. Locating the Event time within VP, it is correctly predicted that an adverbial that modifies the Event time is adjoined to VP. On the other hand, since the Reference time is argued to be within AspP, when an adverbial is adjoined to AspP, it modifies the Reference time. The syntax of temporal adjunct clauses is accounted for in a similar fashion; they may be adjoined either to VP, where they are interpreted as simultaneous with the matrix event, or to AspP, where they are interpreted as nonsimultaneous. Thompson shows that the analysis sheds light on the less-studied issue of the temporal syntax of arguments. Subjects with gerundive relative clauses are claimed to be interpreted in VP at LF when the relative clause is temporally dependent on the Event time of the main clause, and in TP when the relative clause is dependent on the Speech time of the main clause. By extending the syntactic proposal to investigate the discourse-level effects of tense, an original analysis of the discourse representation of tense is proposed. Thompson argues that the discourse representation of tense is based on same primitives and subject to the same principles as the syntactic representation of tense, based on an in-depth examination of the structure and meaning of the temporal discourse adverb then.