- The Destruction of Wildlife for Traditional Chinese Medicine 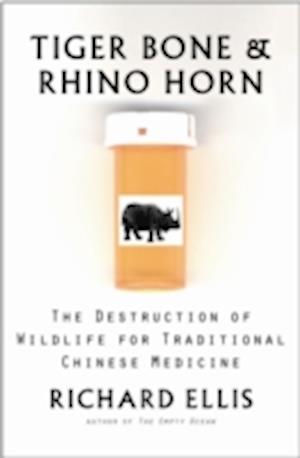 In parts of Korea and China, moon bears, black but for the crescent-shaped patch of white on their chests, are captured in the wild and brought to 'bear farms' where they are imprisoned in squeeze cages, and a steel catheter is inserted into their gall bladders. The dripping bile is collected as a cure for ailments ranging from an upset stomach to skin burns. The bear may live as long as fifteen years in this state. Rhinos are being illegally poached for their horns, as are tigers for their bones, thought to improve virility. Booming economies and growing wealth in parts of Asia are increasing demand for these precious medicinals. Already endangered species are being sacrificed for temporary treatments for nausea and erectile dysfunction.Richard Ellis, one of the world's foremost experts in wildlife extinction, brings his alarm to the pages of Tiger Bone & Rhino Horn, in the hope that through an exposure of this drug trade, something can be done to save the animals most direly threatened. Trade in animal parts for traditional Chinese medicine is a leading cause of species endangerment in Asia, and poaching is increasing at an alarming rate. Most of traditional Chinese medicine relies on herbs and other plants, and is not a cause for concern. Ellis illuminates those aspects of traditional medicine, but as wildlife habitats are shrinking for the hunted large species, the situation is becoming ever more critical.One hundred years ago, there were probably 100,000 tigers in India, South China, Sumatra, Bali, Java, and the Russian Far East. The South Chinese, Caspian, Balinese, and Javan species are extinct. There are now fewer than 5,000 tigers in all of India, and the numbers are dropping fast. There are five species of rhinoceros--three in Asia and two in Africa--and all have been hunted to near extinction so their horns can be ground into powder, not for aphrodisiacs, as commonly thought, but for ailments ranging from arthritis to depression. In 1930, there were 80,000 black rhinos in Africa. Now there are fewer than 2,500.Tigers, bears, and rhinos are not the only animals pursued for the sake of alleviating human ills--the list includes musk deer, sharks, saiga antelope, seahorses, porcupines, monkeys, beavers, and sea lions--but the dwindling numbers of those rare species call us to attention. Ellis tells us what has been done successfully, and contemplates what can and must be done to save these animals or, sadly, our children will witness the extinction of tigers, rhinos, and moon bears in their lifetime.