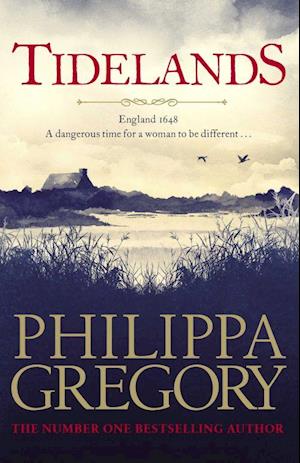 Forfattere
Forlagets beskrivelse 'Gregory is an experienced storyteller and doesn't let you down. Tidelands is a gripping and intelligent portrait of a woman fighting to survive in a hostile world' THE TIMESTHE BRAND NEW SERIES FROM THE SUNDAY TIMES NUMBER ONE BESTSELLING AUTHOR England 1648. A dangerous time for a woman to be different . . . Midsummer's Eve, 1648, and England is in the grip of civil war between renegade King and rebellious Parliament. The struggle reaches every corner of the kingdom, even to the remote Tidelands - the marshy landscape of the south coast. Alinor, a descendant of wise women, crushed by poverty and superstition, waits in the graveyard under the full moon for a ghost who will declare her free from her abusive husband. Instead she meets James, a young man on the run, and shows him the secret ways across the treacherous marsh, not knowing that she is leading disaster into the heart of her life. Suspected of possessing dark secrets in superstitious times, Alinor's ambition and determination mark her out from her neighbours. This is the time of witch-mania, and Alinor, a woman without a husband, skilled with herbs, suddenly enriched, arouses envy in her rivals and fear among the villagers, who are ready to take lethal action into their own hands. 'The first in a planned series . . . The author crafts her material with effortless ease. Her grasp of social mores is brilliant, the love story rings true and the research is, as ever, of the highest calibre' Elizabeth Buchan, Daily Mail'Vivid and beguiling - Philippa Gregory at her best' woman&home'A compelling novel that shines a light on the struggles of 17th century women' Daily Mirror 'The novel's power lies in Gregory's evocative portrayal of the tidelands and the everyday lives of those who are bound to them' Sunday Express'Philippa Gregory returns with an English Civil War novel that excels in everything she does best. Historical events are written with breathless immediacy, keeping the reader enthralled even if they know the outcome. She pays close attention to the plight of women in the past, so often unchanged despite men's wars, and gives them a voice . . . Fans will not be disappointed' Alys Key, The i'Shines a light on the struggles of 17th century women . . . If this novel is the first sign of what's to come then readers are in for a treat' Emma Lee-Potter, Daily Express'Tidelands evokes a world of suspense and superstition. Its fascinating fictional heroine, Alinor, is caught in a net of in-between spaces . . . I was completely swept up in this wonderful, immersive story set in the English Civil War when women who lived unconventional lives risked being accused of witchcraft' Tina Jackson, Writing Magazine