Through the Daemon's Gate 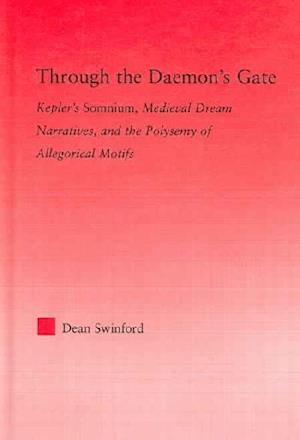 This book tells the story of the early modern astronomer Johannes Kepler's Somnium, which has been regarded by science historians and literary critics alike as the first true example of science fiction. Kepler began writing his complex and heavily-footnoted tale of a fictional Icelandic astronomer as an undergraduate and added to it throughout his life. The Somnium fuses supernatural and scientific models of the cosmos through a satirical defense of Copernicanism that features witches, lunar inhabitants, and a daemon who speaks in the empirical language of modern science. Swinford's looks at the ways that Kepler's Somnium is influenced by the cosmic dream, a literary genre that enjoyed considerable popularity among medieval authors, including Geoffrey Chaucer, Dante, John of Salisbury, Macrobius, and Alan of Lille. He examines the generic conventions of the cosmic dream, also studying the poetic and theological sensibilities underlying the categories of dreams formulated by Macrobius and Artemidorus that were widely used to interpret specific symbols in dreams and to assess their overall reliability. Swinford develops a key claim about the form of the Somnium as it relates to early science: Kepler relies on a genre that is closely connected to a Ptolemaic, or earth-centered, model of the cosmos as a way of explaining and justifying a model of the cosmos that does not posit the same connections between the individual and the divine that are so important for the Ptolemaic model. In effect, Kepler uses the cosmic dream to describe a universe that cannot lay claim to the same correspondences between an individual's dream and the order of the cosmos understood within the rules of the genre itself. To that end, Kepler's Somnium is the first example of science fiction, but the last example of Neoplatonic allegory.