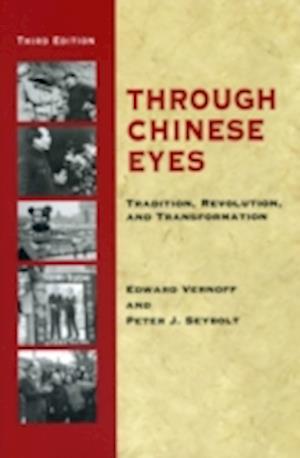 Through Chinese Eyes tells the sweeping story of Chinese history, politics and culture - from ancient China to the turbulent transformation of the last thirty years - through the eyes of its own citizens. Speeches and writings from Chinese leaders and political activists are interspersed with thoughtful analysis by the editors, Edward Vernoff and Peter J. Seybolt. Artwork cleverly illustrating the complexity of modern China includes photos of Western-style billboards in Chinese cities, the cover of a Chinese copy of Monopoly and a deck of cards using pictures of Western currencies for the high cards and Asian currencies for the low cards.Half the material in this Third Edition of Through Chinese Eyes relates to changes in Chinese society since the 1980s. The Era of Reform section describes the changes, engineered primarily by Deng Xiaoping, that have taken place in China during the last two decades. China and the World discusses the role of China on the world stage, with a particular focus on international relations since the 1970s. It includes a section on Chinese relations with the United States.This edition is an expanded and updated version of the 1974 classic, slightly revised in 1981. Material from the classic text, that makes this third edition twice the size of the original, includes: Revolution: A Nation Stands Up, recounting the conditions in rural China in the 1940s and the Communist transformation of village life during the civil war; The Conservative Tradition, presenting aspects of Confucianism which dominated Chinese society for over two millennia; and The Era of Mao Zedong, presenting the story of the Communist Revolution from its beginnings in the 1920s until the death of Mao in 1976. A new section, The Seeds of Revolution, provides examples of the Chinese counter-tradition of equality and rebellion and foreshadows the revolution.Through Chinese Eyes is the third edition of a classic CITE book. CITE, the Center for International Training and Education, is a program of the Council on International and Public Affairs' "World Cultures Series," a group of books that presents world cultures to readers through the "eyes" of its own peoples. Known as the "Eyes" books, these textbooks - regularly updated - have sold more than half a million copies since the early 1970s. In 2004, one of the series (Through Middle Eastern Eyes) was a winner of the American Library Association's Choice Magazine Outstanding Academic Title Award.