Through a Blue Lens 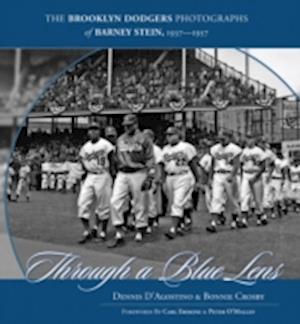 Barney Stein was the Dodgers' official team photographer from 1937 until the team left for Los Angeles in 1957. With access that no other photographer had, his camera chronicled every aspect of the team's most vibrant and memorable period. But his Brooklyn Dodger work has remained one of the sports world's 'lost treasures,' since--except for rare and scattered glimpses--it has not been published or otherwise seen since the team left New York. Now, to commemorate the 50th anniversary of the Dodgers' last season in Brooklyn, Barney Stein's Dodgers photographs live again. The book takes you to every corner of Ebbets Field - to the playing field, the dugout, the locker room, even to the fabled Marble Rotunda. You'll see the on-and-off-the-field legends who made the Brooklyn years so unforgettable, as well as never-before-seen photos of the final game at Ebbets Field and the legendary ballpark's demolition.