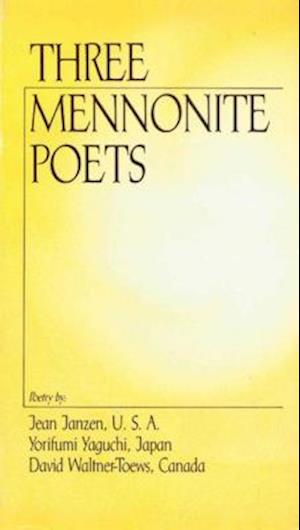 This well-received collection features three poets who differ widely in culture and style, yet are rooted in common values. Yorifumi Yaguchi is a well-known Japanese poet and professor. Jean Janzen is a Fresno, California, poet whose work has appeared in many literary magazines, and David Waltner-Toews is a Canadian with several books to his credit. Why publish a collection of this sort? Poetry as an artistic endeavor has been scarce among Mennonite people through the centuries. This may be because of their conscious separation from the larger world, or their struggle as an immigrant people, or a general suspicion of the arts held by many members of the groups. The three poets in this collection are among the finest in the Mennonite peoplehood worldwide, today. The tension between their lives, their particular cultures, and their yearnings has resulted in poetry rich in imagery and full of conviction. What common themes might a woman from California, a man from eastern Canada, and another from Japan express? Perhaps most basic is an honesty, a bare-bones truthfulness, a disdain for pretense that threads through all the poems. There is also in each a sense of design in which the individual is part of a community -- a family, or a tribe, or a people. The cultivation of that embrace is life; the loss of it is crippling, and sometimes even death. One hears, as well, a wish for peace -- with one's spouse, one's past, with all the "beasts" that beset us, both within and without. These poems reach for justice -- for both children and Grandpas who are victims, for the misunderstood who can't defend their behavior, for those alive only in our memories who can no longer explain their actions.