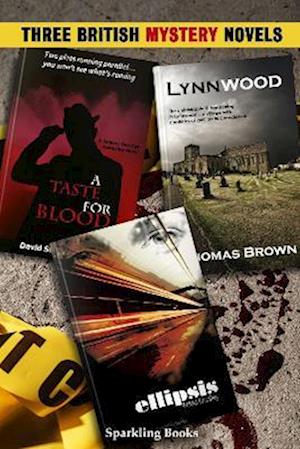 Three authors, three mysteries. Lynnwood, by Thomas Brown, was a finalist in the People's Book PrizeThe unthinkable is happening in Lynnwood a village with centuries of guilt on its conscience.Who wouldn't want to live in an idyllic village in the English countryside like Lynnwood? With its charming pub, old dairy, friendly vicar, gurgling brooks, and old paths with memories of simpler times.A Taste for Blood, by David Stuart DaviesTwo plots running parallel... you won't see what's comingTwo laser-sharp detectives, two thought-provoking cases and two skilful plots.Featuring private investigator Johnny (One Eye) Hawke, and his one-time colleague in the police force Detective David Llewellyn. Llewellyn is investigating the chilling crimes of a top psychiatrist and his scheming patient who the doctor believes has knuckled under his authority. Hawke is on the case of a mysterious suicide in Edgware Road... soon discovered as not your average suicide.The guts and insight of the two investigators bring both cases to a head though you won't even begin to see how until you have turned the last pages.Ellipsis, by Nikki DudleyReviews of the three titles are available on individual title pages