This is How You Lose the Time War

- An epic time-travelling love story, winner of the Hugo and Nebula Awards for Best Novella 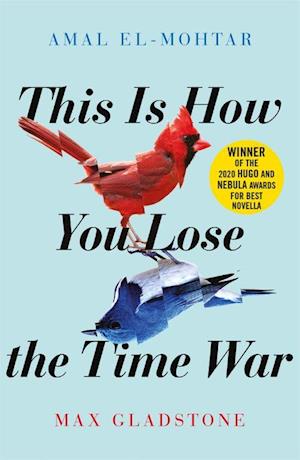 WINNER OF The Hugo and Nebula Awards for Best Novella, the Reddit Stabby Award for Best Novella AND The British Science Fiction Association Award for Best NovellaSHORTLISTED FOR2020 Theodore Sturgeon Memorial AwardThe Ray Bradbury PrizeKitschies Red Tentacle AwardKitschies Inky TentacleBrave New Words Award'A fireworks display from two very talented storytellers' Madeline Miller, author of CirceCo-written by two award-winning writers, This Is How You Lose the Time War is an epic love story spanning time and space.Among the ashes of a dying world, an agent of the Commandant finds a letter. It reads: Burn before reading.Thus begins an unlikely correspondence between two rival agents hellbent on securing the best possible future for their warring factions. Now, what began as a taunt, a battlefield boast, grows into something more. Something epic. Something romantic. Something that could change the past and the future.Except the discovery of their bond would mean death for each of them. There's still a war going on, after all. And someone has to win that war. That's how war works. Right?'An intimate and lyrical tour of time, myth and history' John Scalzi, bestselling author of Old Man's War'Lyrical and vivid and bittersweet' Ann Leckie, Hugo Award-winning author of Ancillary Justice'Rich and strange, a romantic tour through all of time and the multiverse' Martha Wells, Hugo and Nebula Award-winning author of The Murderbot Diaries

Forfattere
Bibliotekernes beskrivelse WINNER OF THE HUGO AND NEBULA AWARDS: Two time-travelling agents from warring futures, working their way through the past, begin to exchange letters - and fall in love in this thrilling and romantic book from award-winning authors Amal-El Mohtar and Max Gladstone.