This is Going to Hurt

- Secret Diaries of a Junior Doctor 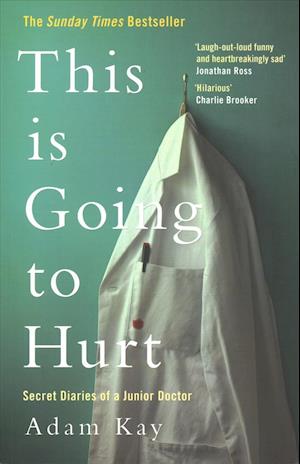 Forfattere
Forlagets beskrivelse The often hilarious, at times horrifying and occasionally heartbreaking diaries of a former junior doctor, and the story of why he decided to hang up his stethoscopePRIZES:Winner of Blackwell's Debut of the Year 2017 (UK)Winner of Books are My Bag Non-Fiction Book of the Year 2017 (UK)Winner of Books Are My Bag Readers Awards Children's Award 2017 (UK)Winner of Big Book Awards: Biography Award 2018 (UK)Short-listed for Blackwell's Book of the Year 2017 (UK)Short-listed for Slightly Foxed Best First Biography Prize 2018 (UK)Short-listed for British Book Awards: Non-fiction Narrative Book of the Year 2018 (UK)
Bibliotekernes beskrivelse As soon as Adam Kay set foot on a hospital ward for the first time, he realized there's quite a lot they don't teach you at medical school . . .His diaries from the NHS front line - scribbled in secret after long nights, endless days and missed weekends -are hilarious, horrifying and heartbreaking by turns. This Is Going to Hurt is everything you wanted to know about being a junior doctor, and more than a few things you really didn't.And yes, it may leave a scar.