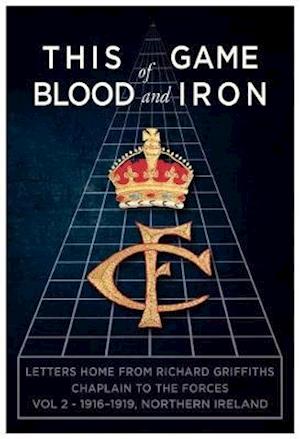 Richard Griffiths served as Chaplain to the Forces in the Boer War and then in France with the 24th Field Ambulance Division from 1914 to 1916 and as Chaplain to the Navy in Northern Ireland from 1916 to 1919. The letters he wrote to his wife almost every day reveal an intelligent, compassionate man, steadfast in his religious faith and his belief that the war was just. His time on the Naval base in Larne drew on his experience as a Chaplain to the Mission to Seamen in Rochester from 1903 to 1910. He had to be discreet in his correspondence in order not to give away naval proceedings, saying on September 22nd 1917, "If we might tell all that we know!" The base included a fleet of mine sweepers, drifters, patrol boats and destroyers, which protected the North Channel of the Irish Sea. With the aid of a small motor boat 'The Dawn of Day', he visited the seamen on as many of the moored vessels as he could. In his own words, "The Missioner is a bit of the outside world, expected to be a kind of walking newspaper in the first place, then a war prophet, a critic and generally the Minister 'with a word' before parting." He describes everyday life in the base, including the rescue of torpedoed British and American crews and the capture of a German U-boat.