- The Universe We Still Don't Know 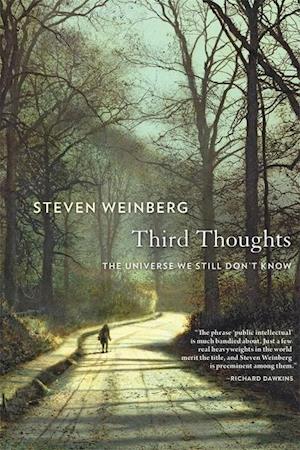 "The phrase 'public intellectual' is much bandied about. Just a few real heavyweights in the world merit the title, and Steven Weinberg is preeminent among them."-Richard Dawkins"Weinberg has a knack for capturing a complex concept in a succinct, unforgettable image... One of the smartest and most diligent scientists around."-NatureIn this wise and wide-ranging meditation, one of the most captivating science communicators of our time challenges us to reconsider the entanglement of science and society. From the cosmological to the personal, from astronomy and quantum physics to the folly of manned spaceflight and the rewards of getting things wrong, Steven Weinberg shares his views on the workings of the universe and our aspirations and limitations. Third Thoughts aims to provoke and inform and never loses sight of the human dimension of scientific discovery."One of the 20th century's greatest physicists...shares his strongly-held opinions on everything from the Higgs boson to the state of theoretical physics and the problems of science and society."-Forbes"This book should be read not only for its insightful and illuminating explanations of a wide range of physical phenomena but also for the opportunity it affords to follow the wanderings of a brilliant mind through topics ranging from high-energy physics and the makeup of the cosmos to poetry, and from the history and philosophy of science to the dangers of economic inequality... [A] captivating book."-Mario Livio, Science