- History, Secrets and Guilt: a Memoir 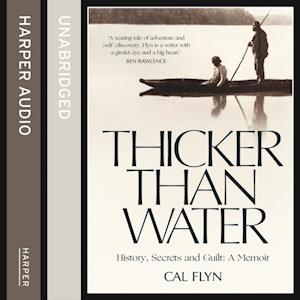 Cal Flyn was very proud when she discovered that her ancestor, Angus McMillan, had been a pioneer of colonial Australia. However, when she dug deeper, she began to question her pride. McMillan had not only cut tracks through the bush, but played a dark role in Australia's bloody history. In 1837 Angus McMillan left the Scottish Highlands for the other side of the world. Cutting paths through the alien harshness of the Australian frontier, McMillan became a pioneer to be forever mythologised in the statues and landmarks that bore his name. He was also Cal Flyn's great-great-great-uncle. Inspired by this glimmer of an ancestral greatness, Flyn followed in his footsteps to Australia, where her investigations forced her to confront dark and horrifying family secrets. She discovered that McMillan and his peers were responsible for a series of assaults on indigenous peoples so ferocious that the sites would ever after be synonymous with bloodshed: Skull Creek, Boney Point, Slaughterhouse Gully. McMillan too had a new name: the Butcher of Gippsland. Driven to piece together his story and confront her own history, Flyn looks for answers: How could a man lauded for his generosity and integrity commit such terrible acts? How could a man who had witnessed the horror of Highlanders cleared from their lands then massacre and 'clear' indigenous people on the other side of the world? How can whole societies come to be overlooked and forgotten? Should today's generation atone for their ancestors' sins?Blending memoir, history and travel, 'Thicker Than Water' evokes the startlingly beautiful wilderness of the Highlands, the desolate bush of Victoria and the reverberations on one from the other. A tale of blood and bloodlines, it is a powerful, personal journey into dark family history, intergenerational grief and the inherited guilt that we all carry with us.