They Had to Die That Night: The Inside Story Of The Investigation and Trial Of Herbert F. Steigler 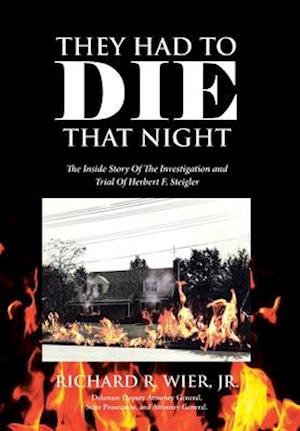 In the early morning hours of October 19, 1968, a fire spread rapidly through a suburban home in Wilmington, Delaware, killing three sleeping victims: a six-year-old girl and a retired couple. The murderer spread ten containers of gasoline around the first floor of the home and up the stairs onto the second floor. The murderer deliberately blocked any escape from the second floor where the victims were sleeping. A fourth potential victim escaped by chance, having woken up and interrupted the murderer before he could complete his murderous plan.

Richard R. Wier Jr. was a young deputy attorney general in the Delaware Attorney Generals Office at the time of the murders. He and a fellow prosecutor, John Mulford, were assigned to investigate and prosecute the person responsible for the horrific crimes. It would become the longest criminal jury trial in a Delaware state court at the time. This is the true behind-the-scenes story of the prosecutions efforts to find out who committed these murders and the actual decisions made by the prosecutors in bringing the case to trial.

This compelling story brings the reader face-to-face with the killers motives and the aftermath of the criminal trial. It has such diverse characters as a professional arsonist for the mob and a world-renowned expert on flame dynamics who had no handshis artificial hands covered with black gloves. It has adultery, misappropriation of funds, lie detector tests, unethical business practices, commercial crimes. At its centerpiece is a killer who appears to be a psychopath by his lack of remorse, conscience, and connection to the victims.

You will ask the question, was justice done for the three deceased victims by their familys treatment of the murderer? Start now to answer that question.