They Don't Eat Neckbones in Chicago

- Leaving the country behind 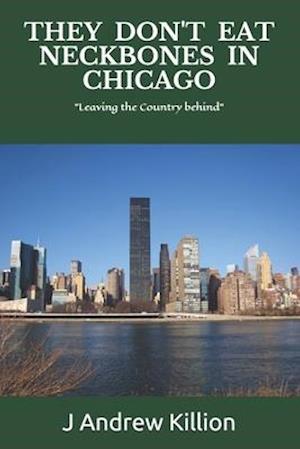 Imagine, for a moment, that you are a beautiful woman with the physical attributes few men could ever hope to resist. You've had two husbands, but each marriage lasted only briefly, leaving you without the one thing you wanted most in life; a child of your own. However, there was one consolation. Both of your husbands were extremely wealthy, and their untimely deaths resulted in you instantly becoming a multi-millionaire. The question then became, "Would this help you forget about your dream of becoming a mother?"Being an intelligent and educated woman, you quickly began pursuing other challenges. During the first year you became successful in the stock market, the second year gas and oil exploration, and leases, and the third year overseas investments. To the surprise of everyone but yourself, in those three years your personal wealth became such that you had more money than you could reasonably spend in a lifetime. So you decided to seek out the perfect man you wanted to father you a child. While the list of men eager to make your acquaintance was long and distinguished, your list of standards and requirements eliminated many of them on sight. Investigators would find issues involving the others that would also deem them unacceptable as well. With the list of prospects drying up you left your hometown and moved to Chicago. By chance, not long after your arrival in the Windy City you observe young man you consider simply too good to be true. However, to your disappointment you soon find that in addition to the high moral standards you correctly assumed he had, the young man also had a live-in girlfriend. But not just any girlfriend, this young lady was not only conceited and temperamental; she was also extremely possessive with a mean jealous streak.And if that wasn't bad enough, there was also his "adopted" sister, fresh in from the cotton fields of Mississippi. He treated her as if she really was his "baby sister" until one day she would surprise herself and everyone else with her shocking physical transformation. It would explain why her cousin no longer wanted her around. And yet, because of the treatment she received from her cousin, his conceited live-in girlfriend, he soon developed feelings for his baby sister. While he refused to acknowledge those feeling to anyone, especially himself, they went far deeper than what a brother normally has for his sister.But things didn't end there. Also in the picture was a deceitful ex-best friend, a seventeen year old vixen who looks and maturity far exceeded her tender seventeen years. Moreover, to make matters worse, she had personally chosen him as the person she wanted to take her virginity. And lastly there was his boss that was anything a man could want, and some. Plus, being a maintenance man, there was an assortment of other women willing and ready for him to share their bed. This would seem to leave you with only one option. Your first option, if you were the woman who wanted a child, would be to devise a plan to get him into your apartment and then seduce him. If that didn't work, you could decide to hire him for what most men would have done for free. The question was, with his moral integrity, and the fact he was living with another woman, would he take the job?