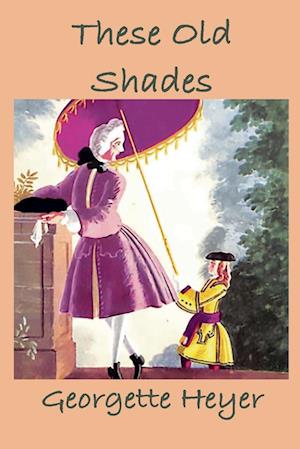 These Old Shades was itself originally intended to be a sequel to Heyer's first novel The Black Moth, which would redeem the devilish Belmanoir. But as The Black Moth was a melodrama and a sequel per se would not work in with the plot, she decided to make the new novel stand-alone, renamed many characters, and made them 'shades' of their former selves for These Old Shades.

The title is taken from Austin Dobson's epilogue poem to his collection of essays Eighteenth Century Vignettes.

The novel was an instant success and established the author as a writer.

Heyer essentially established the historical romance genre and its subgenre Regency romance. Her Regencies were inspired by Jane Austen. To ensure accuracy, Heyer collected reference works and kept detailed notes on all aspects of Regency life. Whilst some critics thought the novels were too detailed, others considered the level of detail to be Heyer's greatest asset. Her meticulous nature was also evident in her historical novels; Heyer even recreated William the Conqueror's crossing into England for her novel The Conqueror.

Beginning in 1932 Heyer released one romance novel and one thriller each year. Her husband often provided basic outlines for the plots of her thrillers, leaving Heyer to develop character relationships and dialogue so as to bring the story to life. Although many critics describe Heyer's detective novels as unoriginal, others such as Nancy Wingate praise them "for their wit and comedy as well as for their well-woven plots".