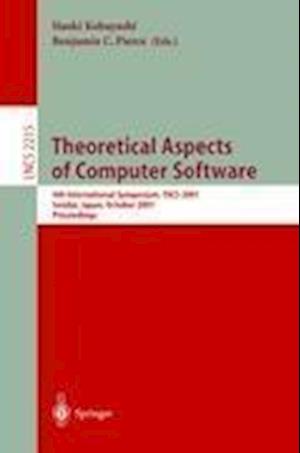 This volume constitutes the proceedings of the Fourth International Symposium on Theoretical Aspects of Computer Software (TACS 2001) held at Tohoku U- versity, Sendai, Japan in October 2001. The TACS symposium focuses on the theoretical foundations of progr- ming and their applications. As this volume shows, TACS is an international symposium, with participants from many di?erent institutions and countries. TACS 2001 was the fourth symposium in the TACS series, following TACS'91, TACS'94, and TACS'97, whose proceedings were published as Volumes 526, 789, and 1281, respectively, of Springer-Verlag's Lecture Notes in Computer Science series. The TACS 2001 technical program consisted of invited talks and contributed talks. In conjunction with this program there was a special open lecture by Benjamin Pierce; this lecture was open to non-registrants. TACS 2001 bene?ted from the e?orts of many people; in particular, members of the Program Committee and the Organizing Committee. Our special thanks go to the Program Committee Co-chairs: Naoki Kobayashi (Tokyo Institute of Technology) Benjamin Pierce (University of Pennsylvania).