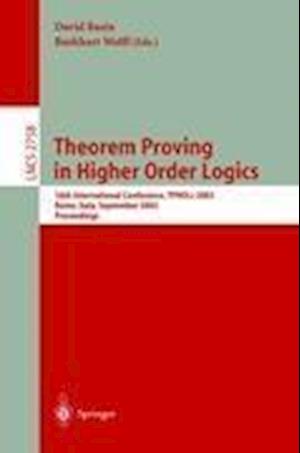 This volume constitutes the proceedings of the16th International Conference on Theorem Proving in Higher Order Logics (TPHOLs 2003) held September 8-12, 2003 in Rome, Italy. TPHOLs covers all aspects of theorem proving in higher order logics as well as related topics in theorem proving and veri?cation. TPHOLs 2003 was co-located with TABLEAUX, the International Con- rence on Automated Reasoning with Analytic Tableaux and Related Methods, and with Calculemus, the Symposium on the Integration of Symbolic Compu- tion and Mechanized Reasoning. There were 50 papers submitted to TPHOLs in the full research category, each of which was refereed by at least 3 reviewers, selected by the program c- mittee.Ofthesesubmissions,21wereacceptedforpresentationattheconference and publication in this volume. In keeping with tradition, TPHOLs 2003 also o?ered a venue for the presentation of work in progress, where researchers - vite discussion by means of a brief preliminary talk and then discuss their work at a poster session. A supplementary proceedings containing associated papers for work in progress was published by the computer science department at the Universit at Freiburg. The organizers are grateful to Jean-Raymond Abrial, Patrick Lincoln, and Dale Miller for agreeing to give invited talks at TPHOLs 2003. The TPHOLs conference traditionally changes continent each year in order to maximize the chances that researchers from around the world can attend.