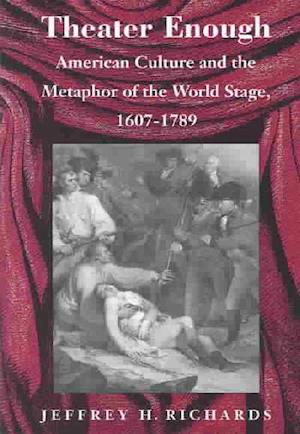 The early settlers in America had a special relationship to the theater. Though largely without a theater of their own, they developed an ideology of theater that expressed their sense of history, as well as their version of life in the New World. Theater Enough provides an innovative analysis of early American culture by examining the rhetorical shaping of the experience of settlement in the new land through the metaphor of theater.The rhetoric, or discourse, of early American theater emerged out of the figures of speech that permeated the colonists' lives and literary productions. Jeffrey H. Richards examines a variety of texts-histories, diaries, letters, journals, poems, sermons, political tracts, trial transcripts, orations, and plays-and looks at the writings of such authors as John Winthrop and Mercy Otis Warren. Richards places the American usage of theatrum mundi-the world depicted as a stage-in the context of classical and Renaissance traditions, but shows how the trope functions in American rhetoric as a register for religious, political, and historical attitudes.

Forfattere
Bibliotekernes beskrivelse An analysis of early American culture which examines the rhetorical shaping of the experience of settlement in the new land through the metaphor of the theatre.