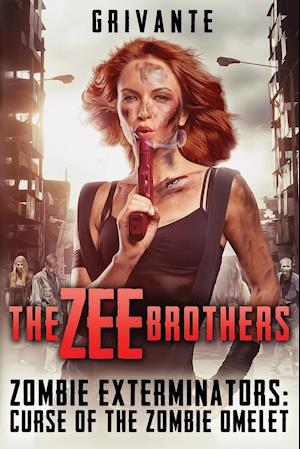 Who would you call during a zombie outbreak?

The Police? The Military? Your crazy prepper neighbor?

No, it's time for The Zee Brothers

An Arizona sub-division over-run by a long-buried tribe.

A race to stop the dead from unleashing an ancient curse.

Two brothers keeping the apocalypse at bay, one job at a time.

The Zee Brothers: Curse of the Zombie Omelet is our hilarious introduction to Jonah, Judas & JJ, the lovable disaster prone trio, responsible for keeping the zombie apocalypse from becoming a reality.

Gruff and handsome, Jonah Zee, is the dominating, classic music loving leader, that calls the shots and keeps them coming.

Tobacco chewing, Judas Zee is the gun slinging, rock music loving goofball, that is slow to learn, but always has his big brother's back.

And the hot and sassy JJ, is the heroine that captures the brother's hearts and eyes, while doing her best to keep her dog, Xanadu, out of trouble.

Filled with pop culture nods and heroes that just don't know when to quit, it's a slap happy, blood-filled adventure, as the trio fights off zombies and the brothers fight each other for JJ's affection.

If you like Ash Vs Evil Dead, Army of Darkness and Scooby Doo, you'll want to read this action-packed tale of zombie mayhem Dive into The Zee Brother's adventures today