indgår i serie The Worlds of Blakes 7 Avalon 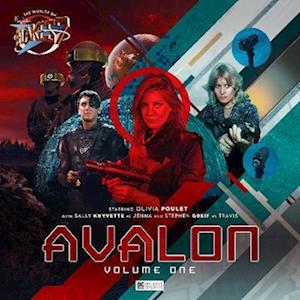 The third century of the second calendar. Roj Blake is about to discover a powerful spaceship and spearhead a rebellion against the despotic Federation. But he can't be everywhere at once...Throughout the galaxy, brave people fight for freedom, without the benefit of miraculous alien technology. Avalon has only her wits and her contacts to reply on - but her name will become legend, all the same.1.1 Terra Firma by Steve Lyons. The Resistance on Earth has been decimated. Blake has been arrested. Avalon returns home, to the seat of the Federation's power, to pick up the pieces. But she'll need the help of a self-centred smuggler named Jenna...1.2 Throwback by Gary Russell.Argo Madison's career as a clerk was uneventful - until a band of outlaws burst into his ordered life and brought it crashing down around him. Now, Captain Travis of Space Security wants to know what Madison knows about the rebel leader Avalon...1.3 Black Water by Trevor Baxendale.Avalon hopes to pull the Resistance on Earth together with a bold attack upon an Administration facility. But her plan might be doomed before she can put it into action, thanks to a traitor in the ranks...Cast: Olivia Poulet (Avalon), Sally Knyvette (Jenna Stannis), Stephen Greif (Travis), Nicholas Asbury (Krask), Cliff Chapman (Madison), Stewart Clark (Kiril), Jon Edgley Bond (Jon Weston), William Ellis (Gryson), Malcolm James (Dev Tarrant), Dawn Murphy (Dag), Richard Reed (Challis), Becky Wright (Fay). Other parts played by members of the cast.